The Poison of Subjectivism 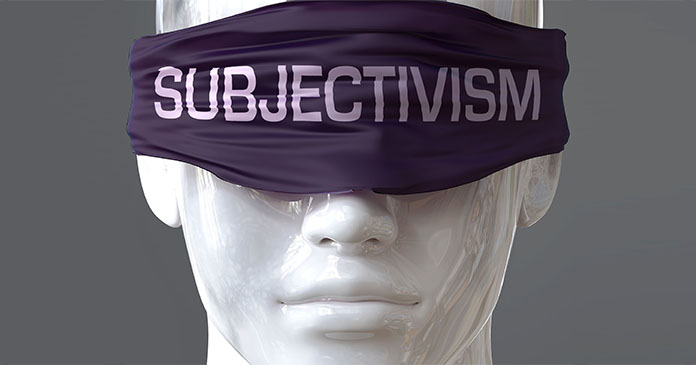 C.S. Lewis’ ‘The Poison of Subjectivism’ and its implications for liturgy and the future of the Church.

CS Lewis (1898-1963) was Professor of Medieval and Renaissance Literature at Oxford University and later Cambridge University. Lewis is perhaps best known as a Christian apologist and novelist. One of his best-known works is the classic children’s tale “Chronicles of Narnia.” Although not as well-known, Lewis also wrote many important non-fiction books and essays as well as academic works.  One of his most important essays, in my opinion, is “The Poison of Subjectivism”. Written nearly eighty years ago this essay is as relevant today as ever, if not more so.  The basic thesis is that moral relativism inevitably leads to totalitarian tyranny by giving philosophies of Power crucial support.

Ironically, Subjectivism is the result of a purely scientific approach to understanding the natural world. After centuries of analyzing the world around him, man has begun to study himself so that his own reason has now become the object of his analysis: “It is,” Lewis says “as if we took out our eyes to look at them.” Man’s reason has allowed him to discover facts about nature and these discoveries have given him the knowledge and power to control and manipulate nature. On the whole, these discoveries have been enormously beneficial for they have produced vast improvements and conveniences which have made modern life so incredible. But these advances have not come without cost. When man’s power to manipulate nature is turned on his own reason, doubts about reason’s ability to know objective moral truths begin to grow.

Just as the objective world contains things with natures that can be understood, so human beings have a nature that can be understood and, when understood and followed leads to human flourishing. But to flourish presupposes some objective standard, the Good against which human flourishing can be evaluated. “Good,” Lewis says, “is something objective and reason the organ by which it is apprehended.” To discern the Good entails judgment of value and judgment is a function of reason. But when we doubt reason and reason’s ability to know the truth, we doubt reason’s ability to judge between good and bad, right and wrong. Consequently there is no right and wrong, good and bad, objectively speaking; only opinions.

Value judgments are a result of what Lewis calls ‘practical reason’—our ability to know the difference between good and evil. “Until modern times no thinker of the first rank ever doubted that our judgments of value were rational judgements or that what they discovered was objective.”

“The modern view,” Lewis says, “is very different. It does not believe that value judgments are judgements at all. They are sentiments, or complexes or attitudes produced in a community … to say a thing is ‘good’ is merely to express our feelings about it and our feelings about it are the feelings we have been socially conditioned to have.”

If values are not intrinsic to our nature, something objective, something we learn, but rather mere feelings, then we can be conditioned to feel any way our conditioners want us to feel.

The ideology that presumes it can abandon objective moral standards and create a new value system goes by the name “Progressivism.” Progressivism is the antithesis of traditional morality; they cannot coexist. In order for progressivism is to succeed it cannot simply ignore traditional morality, it must destroy it. And because the new value system is artificially created, it must be imposed by social conditioning, indoctrination and, if necessary, force. “Progress” as Progressives understand it is not possible if there is a permanent moral standard, therefore tradition and especially traditional morality must be crushed. “Subjectivism about values is eternally incompatible with democracy,” Lewis says.  If there are no objective moral standards, no Law of Nature which overarches ruled and rulers alike then “the ethos of any society is the creation of its rulers and conditioners, and every creator stands above and outside his creation.” Our rulers and conditioners, in other words, are not subject to the new moral values they create, but everyone else is.

That is why traditional religious practices are intolerable to progressives and totalitarian regimes: traditional religious practices stand resolutely on the side of immutable moral truths. Practitioners of traditional religion refuse to be conditioned. Traditional religious practices refute the idea that values are created by so-called ‘experts’ and faceless bureaucrats. And this is where the Poison of Subjectivism has implications for liturgy, for liturgy is the visible expression of those eternal truths and transcendent values in which human nature and traditional mores are rooted. Traditional moral values and traditional liturgical practices go together. If the liturgy is simply a product of our own imagination, then there is no ultimate reality from which it flows and to which aims. Consequently, there’s no ultimate moral law to which one is subject. Novel liturgical practices are incompatible with traditional moral norms, or at least they don’t provide the support needed to help us live moral and upright lives. Far from constraining us, tradition liberates us from the tyranny of ‘what’s-happening-now’ because it’s rooted in the distant past and so isn’t beholden to current fads. Tradition liberates us from the poison of subjectivism.