The order of worship and the tranquility of order 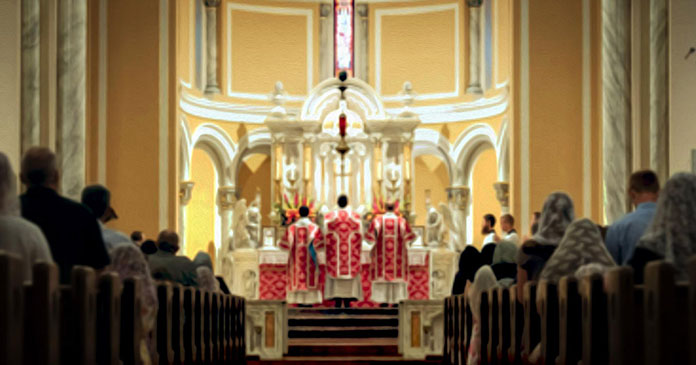 Let all things be done decently and according to order. (1 Corinthian 14:40)

When God appears, chaos, death and disorder flee. In the Bible, placid water symbolizes life and peace, while stormy, wind-swept seas represent chaos and death. From beginning to end, the Bible is a record of the perpetual struggle between order and chaos, life and death, peace and violence.

In the end, as in the beginning, order and tranquility prevail as the new Jerusalem, “city of peace,” descends from heaven and God dwells once again with his people, “wiping away every tear from their eyes, and death is no more.” (Rev. 21:3-4). If we consider the first verses of Genesis and the last chapters of Revelation we see that order, harmony and peace are from God who “makes all things new.” (Rev. 21:5).

Our nemesis, the devil, is the author of the opposite: disorder. As his name implies, he creates chaos by dividing people from each other and from God, scattering them to the four winds. In Greek diabolos means to throw apart. Divide and conquer, that’s the strategy of the evil one.

But God, the author of peace and lover of concord, dispels chaos not by violence, not by oppression, not by force, but by an invitation: “Let there be light.”

God says as much to us at the beginning of every Mass: “Let there be light.” Peace in the external order begins with peace in the internal order; that is to say, in the soul. Liturgy therefore is not about camaraderie and fellowship, or having an enjoyable experience, or even celebrating. Liturgy is about instilling order: order in the soul, and then order in the world.

Peace. Tranquility. Order. Rest. Shalom. These are the fruit of faithful and devout worship and the climax of creation (Genesis 2:3). It’s God’s purpose for the world. But it doesn’t happen naturally. The natural course of things, according to the law of entropy, is disorder and death.

Energy is required to maintain order. That’s why we say that liturgy is work. It’s work first and foremost by the God who created us and saved us. (Catechism of the Catholic Church Ch. 1, art. 2). But it’s also our work insofar as we cooperate with and participate in God’s work of redemption. This is the essence of worship, and the essence of devout worship is reverence.

I cannot stress this enough. Reverence is key, whether it be in the ordinary or extraordinary forms of the Mass.

Reverence is the main reason so many young people are drawn to the extraordinary form, the so-called traditional Latin Mass. They’re not nostalgic for the past as some in the hierarchy have asserted. They have never known anything but the novus ordo, the common form of liturgy in Catholic churches. They’re not nostalgic, they’re hungry. Hungry for something more: more devout, more reverent, more sublime, more beautiful than the standard fare provided by most parishes.

There’s no reason, theoretically, why the ordinary form can’t be just as reverent, devout, serious and beautiful as the extraordinary form.

The problem with the ordinary form is that rubrics permit options opening the liturgy to interpretation. This effectively encourages improvisation, which is the death of liturgy. By its very nature, liturgy is order. Order is the prerequisite for tranquility, harmony and peace.

Chaos is capable of expressing itself in an infinite number of ways, none of which build harmony. But order is expressed in a very definite way. This is why it’s often resisted by the rebellious creatures that we are. “It is always simple to fall; there are an infinity of angles at which one falls, only one at which one stands,” wrote G.K. Chesterton.

In liturgical worship proper order is expressed in prescribed ways, principally through architecture, liturgy and music. There are, for example, many kinds of music, but only certain music, sacred music, is proper for Mass.

Order is resisted because it circumscribes behavior. We don’t like that because it contests our will. And yet, despite our resistance, order brings those things which satisfy the soul: proportion, symmetry, balance, harmony, consonance, as well as the harmonious interplay of color and light and sound. Such words characterize order and are captured in one word: Logos, as “In the beginning was the logos and the logos was with God and the logos was God.” (John 1:1).  Logos is the antithesis of chaos. Logos is the source of order. Order is the basis of harmony and peace, in this world and the next.  “Thou wilt keep in perfect peace those whose minds are fixed on thee.” (Isaiah 26:3)