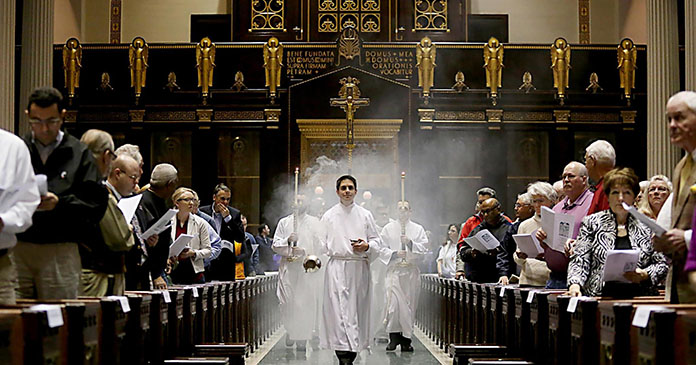 You know the old saying, You don’t get a second chance to make a good first impression. This maxim is important in almost every area of life, but it’s certainly true when it comes to the Mass.

The rubrics for the Introductory Rites states that When the people are gathered, the priest approaches the altar with the ministers while the entrance chant is sung. Notice the rubrics say nothing about a gathering song The liturgy presupposes that the people have already gathered. So, what is the entrance chant? It is a Psalm or other passage of scripture prescribed for a particular Mass. Its purpose is to accompany the entrance procession, to set the tone and identify the theme of the Mass.

At the Vigil Mass for Christmas the antiphon is Today you will know that the Lord will come, and will save us, and in the morning, you will see his glory. The purpose of the Vigil Mass is to transition from Advent to Christmas. So, the Mass focuses, not on the birth of Christ, but on his immanent arrival. There’s still some Advent is this Mass. The antiphon points to the readings which still look forward to the birth of Christ.

On the other hand, the entrance chant for the Mass at night (Midnight Mass) from Psalm 2:7 announces Christ’s arrival: The Lord said to me: You are my son. It is I who have begotten you this day. Present tense.

The same idea holds true for every Mass. For example, the entrance chant for the 19th Sunday in Ordinary Time, (year B; August 8, 2021) says Look to your covenant, O Lord, and forget not the life of your poor ones forever. Arise, O God, and defend your cause, and forget not the cries of those who seek you (Psalm 74).

Again, this verse prepares us for the readings that follow, the key being the word, covenant. Every Mass is a renewal of our covenant with God, first establish at our baptism.

The first reading for this Sunday from Kings 19 recalls the Elijah’s journey to the mountain of God, Mt. Horeb (1 Kings 19:8). Mt. Horeb is another name for Mt. Sinai, the place where God established his covenant with the people of God after their exodus from Egypt. Like the Israelites who fled from Pharaoh in Egypt centuries earlier, Elijah had fled from the wicked king Ahab who sought to kill him. Like his ancestors, Elijah is among the poor ones, which the antiphon identifies as those who cry to God for help. Likewise, the antiphon anticipates the Gospel, which is from Jesus’ famous bread of life discourse in John, chapter six. John six is John’s treatment of the Eucharist, the sacrament of the New Covenant.

It’s not just the text, but the melody of entrance chant that helps us prepare for the Mass. Chant has a celestial effect on those who hear it, unlike any other type of music. Its prayerful, flowing cadence, unbound by time, clearly signals that something supernatural is unfolding. The entrance chant introduces the timeless drama of the Paschal mystery, happening in real time at this particular Mass. It ushers us into another dimension. The entrance chant, because it’s chant and because it’s linked to the readings and prayers of the Mass, helps us delve into the mystery of our redemption.

If you want to improve the quality of your Mass, a great place to start is by singing the entrance chant. If the chant is sung well, it makes a great first impression.

One final note: the entrance chant helps the assembly prepare for the readings. But it also helps the priest focus on the central idea of the Mass and can even provide useful material for his homily. The readings and the chants all fit together, which is why we say sing the Mass.

The faithful are deprived the full range of scriptures appointed for a given Sunday if any of the prescribed antiphons are omitted.

Finally, if you’re a priest and you’re looking for a unifying message that connects all the readings and prayers, the entrance chant provides it. You might even consider preaching a homily, or a series of homilies, based on the entrance chant.